Knee pain is the most common joint pain complaint around the world, in all age groups. Painful knees can have a significant impact on mobility and quality of life. The area and severity of knee pain may vary, depending on the cause of the problem. Ultrasound is a sensitive diagnostic tool for the diagnosis of ligament sprains, tendon problems, muscle tears, knee joint swelling, synovitis, inflammation, arthritic conditions, bakers cyst, bursitis, and ganglion cysts.

A diagnostic ultrasound at our clinic can diagnose the following common problems and treat with ultrasound-guided injections either with steroid/corticosteroid, hyaluronic acid (viscosupplementation/gel or lubrication) injections or Platelet-rich plasma injections can be when conservative treatment fails.

Suffering from Knee Joint Pain? Book in today for a knee pain treatment consultation at our Newcastle Clinic 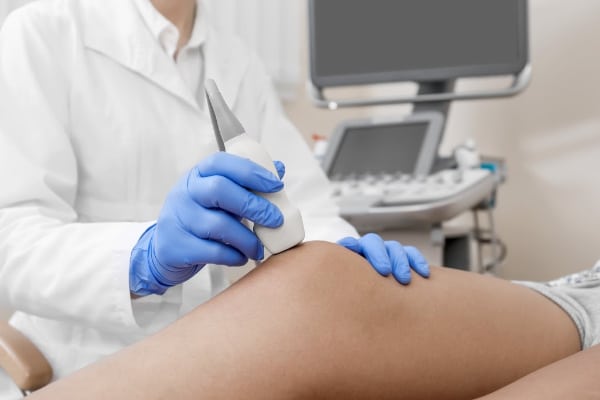 Meniscal Damage: Meniscus is a tough cartilage situated between the tibia and femur and acts as a shock absorber. The meniscus is prone to insure with sports that require sudden twisting and turning on the knee when the knee is planted on the ground.

Tendinitis: Tendinitis is inflammation of the tendon. Patellar tendinitis is the most common tendinitis seen in the knee. The patellar tendon connects the quadriceps to the shin bone on the tibia. Sports such as running, skiing, cycling, jumping are prone to develop patellar tendinitis. PRP, Steroid, and viscosupplementation (gel) injections are the popular treatment options along with the rehabilitation.

Discomfort from the needle insertion can be minimised by using the local anaesthesia using a very fine small needle. Ram is an experienced and carried out more than 30,000 Ultrasound guided injections sofar. He routinely treats complex patients and patients with needle phobia, through the technique he developed through his experience.

You will not be able to drive immediately after the procedure. Bring someone with you Or use other form of transport to return home. This is mainly due to your driving licence policy, rather injection efficacy. Majority of the motor insurance policies will not allow you to drive for 3-5 hours after the injection with Local Anesthesia.

After the injection you may feel pain free for couple of hours due to Local anaesthesia. However, pain returns after 2 hours, you may even feel more painful for couple of days due to bruising pain. Usually, you should starts feeling better from third day onwards. Pain relief from the steroid injection may take 1 to 2 weeks.

Discomfort from the needle insertion can be minimised by using an ice pack ( wrapped in a towel, to minimise the risk of frostbite from a direct skin contact) to the area of treatment. 3-4 times a day and 10-15 minutes at each time

We can accurately inject the treatment area. However, pain relief depends on several factors, such as severity of the problem, body response to the steroid injection, rest period following an injection,  rehabilitation and exposing to the risk factors.

Hyaluronic Acid : no limit as long as you are benefiting.

We cover a wide area throughout Warwickshire and surrounds, either by home visit or clinics in the following areas: Rugby,  Warwick,  Aylesbury,  Milton Keynes, Coventry,  Leamington Spa, Kenilworth, Whitnash, Atherstone, Bedworth, Leicester, Nuneaton, Birmingham and Solihull. We also have a clinic in Newcastle covering the North East.

Any cookies that may not be particularly necessary for the website to function and is used specifically to collect user personal data via analytics, ads, other embedded contents are termed as non-necessary cookies. It is mandatory to procure user consent prior to running these cookies on your website.